A Simple Spot It Clone With PureScript and Pux

Long-time readers may recall that last year I wrote a blog post about the mathematics of Spot It. (For those who don't recall, Spot It is a game where you have a deck of cards, each of which has 8 pictures on it, where through the magical mathematics of finite projective planes every two cards in the deck have exactly one image in common.)

As I am currently in more of a "functional front-end compile-to-JavaScript" mindset, I thought I'd take those ideas and build a little app, using my current favorite framework, purescript-pux.

(Code, as always, on GitHub)

The PuxIt.Math module is basically just the code that generates the "cards". The most relevant part is

Which generates all the lines (cards) in the finite projective plane, maps each to the set of points (images) it contains, and then replaces each point (image) with an (arbitrary but consistent) integer (basically, its index in the array of all points).

Here we'll worry about building a front-end to play with these cards. My first idea was to show two cards at a time, and have the player have to click on the picture in common. 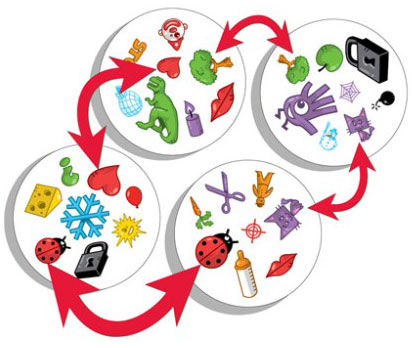 But that's too easy to cheat (from our side), since it's trivial to generate two cards with one image in common, over and over again. Eventually I decided that what's interesting about the setup is that it works, and that a cooler visualization would be to show all the cards, allow the player to select any two, and have the app show the picture in common.

This means a good first start would be to get some images. For the standard game (8 images/card) we need 57 different images. After poking around online, I found a nice CC-BY set of SVG icons, which I then semi-laboriously (and mostly randomly) recolored in my text editor by choosing from a list of named SVG colors and then adding fill="purple" and so forth to each file. I also renamed the files to 0.svg, 1.svg, and so on, to make it easy to generate URLs from the cards.

We'll start with some type aliases to make our code more readable:

Like we said above, our mathy card generation library represents a card as an array of ints, and a deck is just an array of cards. Given the way we named our image files, we can also define:

If you wanted to use a different set of images, you could change this.

Now, then, the state for the game needs to contain the deck of cards (obviously), as well as some indication of which cards the player has selected:

There are many possible ways to represent the selected cards, we'll use a simple sum type to enforce that at most two cards can be selected.

There's only one possible action -- clicking on a card -- in which case we need to know its index:

The card generation library will generate the exact same cards each time. But we'd like each game to be pseudo-unique. Accordingly, when we start a game, we'll shuffle the cards, and we'll shuffle the images contained on each card. (Clearly this doesn't affect the "every two cards have exactly one image in common" property.)

This means we need a function to shuffle an array. Because it requires randomness, it needs to run in an effectful context:

Given some array (of any type) xs, we generate a random number for each element and zip them together to get an array of pairs (rnd, x). We then sort that array using the compareFst function, which only looks at the first element in each pair. Finally, we call map snd to throw away the random numbers. (This is not the most efficient way to shuffle, but it's simple and it works.)

We can now write a function to create a randomized deck:

Here, createDeck is the math-y function that returns the same deck always. We call shuffle on it (creating a shuffled deck in an effectful context), and then "bind" that to traverse shuffle. This is possibly the most complicated part of this code. Let's look at traverse:

So traverse takes an effectful computation (m is the effect), applies to a traversable container (t is the container) and returns an effectful container of (non-effectful) results. (Huh?) Here t is Array and m is Eff (random :: RANDOM), so this specializes to

so that traverse shuffle takes an array of "shufflables", shuffles each array element individually, and returns the result in an effectful context. And now we're ready to write our (effectful) function that generates an initial State for the game:

Now that we've gotten actions and state taken care of, it's time to think about how to update the state in response to actions. Here's there's only a single action, which makes it pretty easy:

The only action is Click i, and so we update the state using the cardClicked i function, which we haven't written yet:

This is a lot of lines, but conceptually it shouldn't be too hard. When you click on a card you're never changing the deck itself, only the SelectedCards property. If no cards are currently selected, we want to select the clicked card. If one card is selected and we click that card, we want to unselect it; if we click a different card we want to select the second card as well. And if two cards are already selected, we either unselect one (if we clicked it), or do nothing (if it's a different card).

At last, we're ready to create the view. As usual, we have a lot of logic that involves the "index" of an array element, so we'll need a helper function to map across elements and their indexes:

And since we'll want to add a special CSS class to the common image between two selected cards, we'll also need a helper function to find it:

This is possibly a bad way to write it, since it will crash if the cards had no common image, but if our math is correct that will never happen. Right?

So then the view:

Curiously, right when I finished the first version of this project, pux 1.0.0 dropped, with a large number of breaking changes, so I had to redo a lot of stuff. In particular, there is a sugary hypertext DSL, but it doesn't cover every use case, so I decided not to use it, since the code looked weird with a mix of DSL and not DSL.

Here the div function takes an array of attrbutes (here, empty) and an array of child Html elements, which are the outcome of the call to mapWithIndex. The function we pass to mapWithIndex is renderCard state.selected correctImage. In order to figure out the correct image, we need to look at multiple cards, so we have to do it at this stage (each call to renderCard will only know about the card it's given). If 0 or 1 cards are selected, there is no correctImage, so it's an option type. We also have to pass down state.selected so that we can add a CSS class to the selected cards.

Because we're passing it to mapWithIndex, it's a function of both Card and CardIndex (after we curry the SelectedCards and the correct image). Again we create a div with an array of attributes (a class, and a click handler) and an array of Html children.

Hopefully the class logic is straightforward. cardClick should be a function that takes a click event and returns an Action, but here we don't actually need any information from the click event, so we just use const.

Finally, the cardHtml is just the result of mapping renderImage over the card (which is an array of images). It needs to know isSelected and correctImage, because we want to add the flashing "correct" class only the the correct image on the selected cards.

At long last we can write renderImage:

Because an <img> tag has no children, the img function only takes an array of attributes, which should be pretty straighforward.

That's the whole application, now we just need to wire it all together:

The only non-ordinary thing here is that because initialState is an effectful function, we need to <- the state out of it.

Anyway, that's about it. (There is also some CSS voodoo to make matching images pulse) and to draw borders around selected cards, but you're not interested in CSS voodoo, are you?)

You can check it out at

although the bundle of all the code is almost 1MB. :( Or fork it and make it your own. :)