But it failed to create any interest in coding. What it did create an interest in was using my computer to play Mad Libs.

Which was fine, but I wanted her to be able to play when I wasn't around (or when I was using my computer for something else).

And then last week I came into possession of a beta invite to the new Streamlit sharing feature. If I could just turn these games into Streamlit apps, then they could be hosted online. And she could play them whenever she wanted.

However, there are several ways in which games are at odds with the Streamlit paradigm. And so it actually took me a long time to get them successfully implemented. Here are some of the things I learned.

Streamlit apps are not exactly "stateless", but (for the most part) if you build a Streamlit app its state is determined by the states of its widgets. Moving sliders and clicking buttons and filling in text fields creates an application state, but (1) it's not hidden from the user, and (2) the user can change it directly. These are not desiderata for a "game state".

Fortunately, it is well known that you can abuse Streamlit's caching mechanism to create persistent state. The pattern I initially used looks like this:

Normally I avoid dataclasses on account of their being mutable, but here that's what we need. GameState contains whatever state our game needs. In Mad Libs, that's a randomly chosen story. In Hangchicken, that's the word to guess and the letters already guessed. And so on. Most of the games also have a game_over flag to disable the inputs and an incrementing game_number so that new games' inputs can have different keys. More on that below.

The persistent_state function takes no arguments and is decorated with st.cache which makes the GameState instance it returns a singleton. When an input value changes and the app reruns, the same state object sticks around, which is what we want.

Finally, we add a "new game" button that resets the game state for a new game.

Many of my first attempts had a nasty bug where if, for example, your text input for Hangchicken had a letter in it, then when you clicked "new game" it would start by guessing that letter. Eventually what I realized was that that text input needed to have a key that depended on an incrementing game number. That way when you click "new game" the key changes and you get a (logically) different text input. (I think.)

By far the most difficult part to figure out was the order of operations. What I mean is this: my original hangchicken game (which ran in the terminal) showed you the chicken, then the word, then the letters you'd guessed; and then asked for your input. Indeed, a terminal game basically has to put the input last. 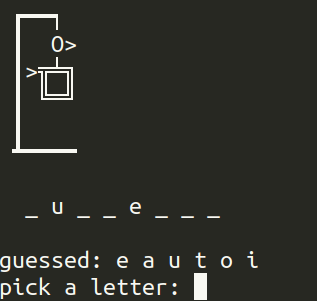 My initial attempts at the game mimicked this order and produced a weird off by 1 error where you'd guess a letter, and then nothing would happen, and then you'd guess a second letter, and then the first letter would show up. This drove me crazy (and I'm still not entirely sure I get it), but I think it has to do with how state "flows through" the Streamlit app.

Eventually I realized that I needed to have the text input before the outputs, so that when it was updated the outputs would update appropriately. But this took me a long time to figure out.

One annoying thing you can notice in the above picture is that after you guess a letter the text input doesn't clear itself, you have to backspace and then guess the next letter. I tried to address this by making the text input key depend both on the game number and on how many letters you'd guessed so far, but this reintroduced a variant of the "off by 1" error I described above and I couldn't figure out how to fix it. So you have to backspace.

I made many false starts that tried to use a while loop and keep rendering down the page much as you'd do in the terminal. It's possible there's a way to make this work, but I couldn't figure it out. In any case, it was intended as a second-best solution, and since I figured out the first-best solution, I didn't need it.

Flat is Better than Nested, But...

Streamlit apps tend to be more nested than I'd like, because there's so much conditional rendering, and these games are no exception:

Maybe there's a pattern that avoids this, but I couldn't think of it.

Unfortunately, our state hack results in the same state for every client. This doesn't matter if one person is playing the game locally, but it matters a lot if you're hosting the app publicly. If you were to play hosted Hangchicken, you and everyone else playing would be making guesses in the same game, which would cause a giant mess.

You can imagine some games for which that would be a feature, but it's harder to imagine those games as Streamlit apps, as you'd likely want your browser to get notified when someone else performs an action in her browser. (It's possible there are deep Streamlit hacks that allow this, but I don't know them.)

Here's a little multiplayer plotting app that illustrates the issue:

Everyone is adding points to the same canvas. Make something pretty.

It turns out to be relatively simple to unshare the state. You just make your "singleton" function depend on the session id. (Getting the session id is less simple.)

Now each browser session (i.e. game player) gets their own copy of the state, and hence their own game.

The Thing About Caching

Unfortunately, there's still a problem, and that's that the app has a "clear cache" button. And when you clear the cache, you clear it for everyone.

So we need to be even more devious and attach the state to the session object:

And finally we have a nice app that supports multiple players!

Of course, that's a repeated mess, so we might as well pull it out into its own module:

(Yes, it's inefficient to recreate that initial state and throw it away each time. Avoiding that is left as an exercise for the reader.)

When Are They Going To Get to the Fireworks Factory

Right, the games. The original code is at

The Streamlit-ified versions are all at

If you clone that repo you can play them locally with e.g.

and so on. Here are links to the specific games:

Let me know if you come up with any cool Streamlit games. Or if there's an easier way to do some of the things I did.