[The fourth in an (at least) 6-part series, all code on GitHub as always.]

I know, you're thinking, "I've already read three parts of this series, and I haven't heard one mention of Haskell. Who are you and what have you done with Joel?"

Well, AWS Lambda doesn't support Haskell. (Yet.) Instead we'll work in PureScript, a very Haskell-like language that compiles to Javascript. In particular, we'll be able to (re-)use the Node.js twitter library via PureScript's foreign function interface.

To start with, install PureScript and its build tool pulp.

Then we need to create a directory and initialize:

(It's possible that it's bad form to both pulp init and npm init, but I did both.)

A new PureScript project doesn't include by default a lot of its basic libraries, so we'll need to install the ones we need for this project:

Now, pulp init should have created a src subdirectory. Go there and create Twitter.purs, where we'll create all of the common types for working with Twitter, as well as the function to initialize the Twitter client.

What do these things mean? In PureScript functions are (by default) pure. If we want them to have side effects, we need to explicitly declare those side effects. And a function that interacts with Twitter is necessarily impure, since it depends on -- and possibly modifies -- the state of Twitter. So we need to define a TWITTER effect that we can use to mark functions as having Twitter-based side effects (or side inputs). (The bang ! means that TWITTER is an effect.)

We also need a type to represent Twitter credentials:

PureScript has easy record types that basically correspond to Javascript objects. That is, the Credentials type is (basically) a Javascript object that has those exact four keys, and whose values are all strings. (However, on the PureScript side it is typed, and you would get an error if you tried to create a Credentials instance with no consumer_key or with a numeric consumer_secret.)

Now we can use the Foreign Function Interface to get an instance of the Twitter client. Let's first handle the PureScript side:

Yikes. The foreign import means that we're going to define this function in Javascript. And the type says that this function takes as input a Credentials object and does something that involves a TWITTER side effect and returns a TwitterClient.

(Eff is the monad for specifying native effects, and indicates that this function can only be run in a "context" that allows TWITTER side effects. The forall eff means that the context can allow other side effects as well.)

Now we're ready to write the Javascript side. Create a companion file Twitter.js:

That's it. The module Twitter comment is important (I think) and tells the PureScript compiler that this goes with the Twitter module in Twitter.purs. The code simply loads the Node.js twitter library and exports the twitterClient function that we declared in Twitter.purs. Its input is a PureScript Credentials object (which gets translated here into just a plain Javascript object, which is exactly what the Twitter function requires).

The only subtlety is that instead of returning the Twitter client directly, we wrap it in a function of zero arguments. We need to do this whenever our function returns an Eff context. (And conversely, if you create a PureScript function whose return value is an Eff, the generated Javascript function requires an extra call, as we'll see later (and which caused me a lot of confusion)).

So, for us, a tweet has an id, a user, and some text. Obviously the actual data model is a lot richer, but this is all we'll need to build our bot.

Next we need to write the code to interface with the search API. We'll stick this in its own module Twitter.Search which we'll create in src/Twitter/Search.purs.

This looks like the previous set of imports, except that now we also import the Twitter module we just created, as well as the Data.Function module.

You see, PureScript functions are all really functions of a single variable. If you were to have

then sum is really a function that takes an Int and returns a new function Int -> Int. For example sum 2 is the function that adds 2 to any number, and sum 2 3 is really (sum 2) 3.

This means that (naively) we need to write foreign functions the same way:

If you have functions with a lot of parameters, this can get ugly really fast. That's where Data.Function comes in, it provides helper functions that allow us to write normal multiple-argument Javascript functions.

The declaration Fn2 Int Int Int means sumImpl is a Javascript function of two Int arguments that returns an Int result. And the runFn2 converts it into the usual curried PureScript function. The exposed sum still looks the same as before, so anyone using the function doesn't need to worry about all of these details.

Anyway, back to Twitter searching. The Twitter search API allows you to specify a lot of options, but we'll restrict ourselves to just q [query] and count [number of results]. And we'll provide a helper function that allows callers to just specify the query:

Finally, we're ready to define the search function, using the Data.Function trick from above:

[Incidentally, I would rather not insist that the callback include the TWITTER effect. Our eventual "retweet" callback will, but you could also imagine just a "log to the console" callback that doesn't. However, it caused me problems if I didn't include it, so it's there.]

Then we need to define searchImpl in Search.js, which is not dissimilar to our initial Node.js version:

We similarly create a Twitter.Retweet module in src/Twitter/Retweet.purs, with just a single function:

Finally, we're ready to do the actual work. (So far we've just been doing the groundwork.) As usual, we create a separate file for credentials, here src/MyCredentials.purs

And then we stick the actual work in src/Main.purs. After importing all the stuff we need, we can create a findAndRetweet function.

Given a TwitterClient and some SearchOptions, it just runs the search using the callback retweetMatches defined here. And retweetMatches just filters out tweets that don't match the regex (if there is one) and calls retweet for each of the tweets that's left.

Finally, we just need a main function to do the work.

The type of main indicates that it does something that involves both the CONSOLE side effect and the TWITTER side effect, and that it doesn't return anything. (Unit is similar to other languages' void.)

And >>= is the scary monad bind, which grabs the TwitterClient out of the Eff monad (recall that twitterClient returns an Eff _ TwitterClient) and hands it to the findAndRetweet function, which (after currying the search options and regex) just takes a TwitterClient and does its magic.

If you run this from the command line:

it should retweet all the things! 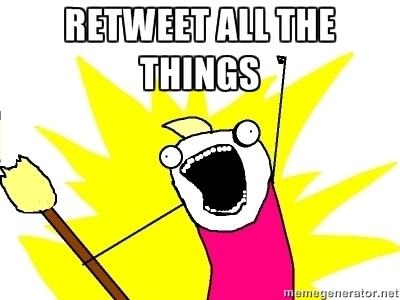 Final note: this probably seems like a lot of work. It was a lot of work. But most of the work was creating a (bare-bones, toy) PureScript Twitter library. If you already had such a library (which, in many applications, you would), it would have been a lot less work, and you would just have to have written the code in Main.purs.

Next time we'll get this PureScript version running on AWS Lambda. (Which might take me a couple of days to pull together, happy new year!)